“....that all this assembly may know that the Lord does not deliver by sword or by spear; for the battle is the Lord’s and He will give you into our hands” (I Samuel 17:47). 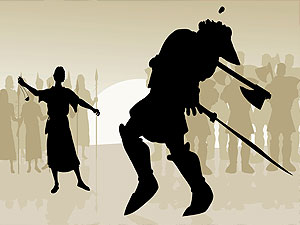 This declaration was made by a very young, brash and seemingly naïve shepherd boy in Israel to an enemy giant named Goliath who was leading the Philistine army against his people. Goliath was 9’9”, wore 125 pounds of armor and carried a spear of which the tip weighed about 18 pounds. Not to mention his huge helmet, shield and javelin slung between his shoulders and the bronze greaves on his legs. Prodigious indeed. I’m sure he probably smelled like a cesspool as well and had really bad teeth! But none of that mattered or intimidated the brassy boy who so brazenly belittled his ominous opponent, though he himself had neither armor nor spear but was armed with just a sling, five very smooth stones, and the Name of the God of the armies of Israel. Prodigious far more. The boy dictated exactly what he was going to do to this blowhard, and then did it. In moments the giant lay dead, decapitated, and his army put to flight. The boy of course was David, who went on to become Israel’s greatest earthly King.

David’s faith in the delivering power of the God of Israel was born out of countless days and nights guarding the sheep he was entrusted with, and testing out time and again against lions and bears the promises of his God’s adequacy. As he often delivered his people from surrounding enemies, David also became the tip of the spear for the Giborim (extraordinary Mighty Men) of Israel.

But David’s faith was fed from a remarkable history. His was not the first extraordinary feat of deliverance in Israel. There were many others in its history since their beginning from Abraham on, not the least of which was out of slavery in Egypt, through forty years of wilderness wandering and finally into their Promise Land. And one character, I would bet, stood out in David’s mind more than some others. He was a leader in his own tribe of Judah and believed in the blessing it was promised. When Israel arrived at the Land initially, he was chosen to be a spy with eleven others to bring back a report about it. Only he and one other returned with a positive report and examples of its prolific bounty and a bid to take possession of it immediately. But the rest melted the courage and hearts of the people and predicted only dire defeat. For that faithless attitude, God turned Israel back into the wilderness for forty more years until all the nay-sayers dropped… all except the two faithful spies, Caleb and Joshua. Now in their eighties, they were as rough and ready to take it as ever.

This history had to be so inspiring to David. As it happened, Caleb was that leader in the tribe of Judah, whose symbol was a lion and was prophesied to be the ruling tribe. Notwithstanding, as they all emerged from a generation of wilderness wandering, they were all just nomads. But Caleb reiterated his same call to arms from forty years prior, and asked permission to conquer the most difficult and inaccessible part of the land that he had previously explored, the hill country of Hebron, where the Anakim (Giants) dwelt. It was also where they had brought back choice examples of the land’s bounty, such as a cluster of grapes so large it had to be carried on a pole by two men. It was the heartland of Canaan, the most fertile and best defended high-ground. On D-Day of the invasion, Jericho was besieged and taken in a miraculous three days. Then more than thirty other cities and kings that we know of. Others fled. Then it was time for each of the tribes to take possession of their allotted territory, which required more fighting. Caleb led the charge and captured all of his region, and Judah become the largest and strongest tribe in Israel, historical cities such as Hebron, Ai, Bethel, Jericho, Gilgal and Bethlehem, and eventually even absorbed the tribes of Simeon and Benjamin. It ultimately became the tribe of King David and his successive line of kings for the Southern Kingdom of Israel. Its territory remains and is the primary surviving tribe to this day.

Nothing is really known about Caleb until that fateful day he was chosen from his tribe to be its delegate spy (the virtual genesis of Mossad!). He performed with distinction and gave a valiant report, along with Joshua, albeit a futile one at the time. It would be forty more years before his vision would be realized, and he stayed faithful throughout. He finally got his chance at battle and conquered not just one but a whole country of giants. He inherited their glorious land and claimed it for the millennial future of Israel itself. No wonder David approached Goliath with the confidence, conviction, clarity and capability he did. Years of personifying Caleb on the hills of Judah now made him so.

As we begin to face down 2016 with all of its requisite challenges and tests, remember that you’re not the first to face-off with a giant. God loves an impossible challenge to demonstrate His power perfected through weakness. His Spirit can make a giant-slayer out of you. Neither Caleb nor David doubted God’s faithfulness. No weapon fashioned against you shall stand.