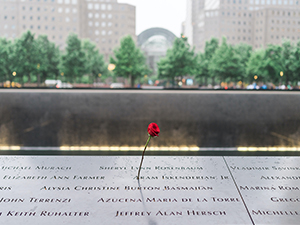 “…Our holy and beautiful house, where our fathers praised Thee, has been burned by fire; and all our precious things have become a ruin…”

Twenty years ago, our national consciousness underwent a paradigm shift, the world as most of us knew it being turned on its head. We had become relatively and naturally complacent to any serious threat of attack from without and were caught completely off-guard. Even long after the first tower was struck, no one thought of it as anything other than a tragic accident. In hindsight, such a thing could statistically only have occurred as a highly organized and sophisticated deliberate act; but our minds were literally incapable of going there. Not us, not here, not now, not ever really. We were too strong and capable and in-control and, dare say, protected by the God “in whom we trust” to be so vulnerable, susceptible and exposed to such a thing. Not many minutes later another hit from a second airliner exploded through the other tower and into every last one of our minds, in real time and living color. America was under devastating attack. A third passenger-filled liner then struck the Pentagon and a fourth one probably intended either for the Capitol Bldg. or the White House intentionally went down in a Shanksville, Pennsylvania field. The fourth plane never reached its intended target because the passengers and crew fought back against the hijackers, even though they knew they would all die doing so (recorded by their cell phone messages to family members and authorities on the ground). They formulated a counterattack and “successfully” carried it out, saving countless other lives and national treasures where they were headed. They battled for six undeterred minutes forcing the hijackers to abort, until they hit the ground, with incapacitated terrorist enemies in tow, at a perpendicular 580 mph. The debris field was eight miles wide; shattered hearts, nationwide.

The world became altered that day. Both we, our allies and especially our enemies realized that for all our sound and fury America could be brought down. Even after twenty years, global warfare has achieved moderately little in reducing the threat. If it’s still true that “In God We Trust,” what is it we’re trusting Him for?

How long is forever? Does anything ever truly stay the same? Country music singer Alan Jackson in his touching ballad “Where Were You When The World Stopped Turning” about the 9/11 attacks, gave the country stirring and emotive expression to our confounding and perplexed processing of it all. He positioned us each in our workaday worlds caught off balance when we suddenly teleported together and stood on the ground in New York, and then before a burning field in Pennsylvania, and ascertained our collective reactions, all of them what we felt at one moment or another. By the end of that day, we were all embracing, in prayer for God’s faith, hope and love. Jackson rightly deduced that the greatest was love.

What have we learned in twenty years? Love in fact helped reunite not only us but much of the world, for a time. It gave us the heart and will to reconnect, sort it out, openly grieve and show grace to the fallen and anguished, devastated and brokenhearted survivors of victims. We built honor-filled monuments and made enduring dedications, all of which reminded us of who we are as Americans, brave and free, and that despite our differences and backgrounds, we could come together and stand united, respecting the dignity and rights to life, liberty and happiness for each other. God’s Spirit of lovingkindness, justice and righteousness abounded in prayer that night everywhere, and moved us forward from ruin to a renaissance of renewal and recovery. But over time we’ve started letting go of each other’s hands. We began once more to emphasize what differentiates us more than connects us and we became ripe for an even greater attack upon our union. What we have now suffered from the isolation of COVID and perceptions of class inequities which seem-ingly have no acceptable solutions are plunging us into a kind of internal ruin that ignores our history together and destroys the heritage that has enabled our resilience and continued growth and development as a singular country, still resplendent with liberty and justice for all if we will pursue it together. But our love grows cold.

We still have a holy and beautiful house, where our forefathers gave praise and thanksgiving, and holidays were meant to remember, appreciate, and respect the price that was paid for our freedoms today and the calling we must preserve and pass down as a sacrificial treasure. Yet there are those who wish to burn it all down and ruin our precious things. With it will go our indivisibility.

Forever is a long time, and the gifts and calling of God are irrevocable. God has entrusted to us a gift and calling for justice and righteousness fueled by His lovingkindness. We must never let go of that last piece of His power. It is our ultimate means of counterattacking and aborting the threat upon us all.

“Eye has not seen a God like Thee, Who acts in behalf of those who Trust In Him.” (v.4)