“Let us love one another, for love is from God, and everyone who loves is born of God and knows God. The one who does not love does not know God, for God is love. In this is love, not that we loved God, but that He love us and sent His son to be the settlement for our sins. If God so loved us, we also ought to love one another… There is no fear in love; but perfect love casts out fear because fear involves consequence, and the one who fears is not perfected in love. We love, because He first loved us.” (1 John 4) 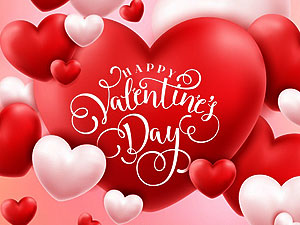 There are a few varied stories about the origin of Valentine’s Day, but they mostly center on a third century Roman, probably a priest, who defied Roman Emperor Claudius II and was jailed for his Christian faith. The history is difficult to authenticate and has given rise to different versions of who he was and specifically why he was arrested, but the end of them all seem to agree in general that Valentine was put to death for what he did to aid Christians during the Roman era of their persecution. Just before that occurred, he is purported to have written a note to the his jailor’s daughter, who was blind, and whom he had befriended and been a source of ministry and encouragement to during his imprisonment, even praying with her to such an effect that she had been healed of her blindness. The note probably contained his kindly affection toward her, and a testimony of how his trust in and love for the Lord compelled him to be willing to die for his convictions if the Lord so willed it. He then signed it “From Your Valentine.” Through the centuries since, this story has developed into a tradition in the west of marking February 14th (the day Valentine was purportedly put to death) as a day to send notes of love and affection to those you particularly care about, and exchange mementos of your love for them. St. Valentine thus came to be revered as the patron saint of lovers. It’s a sad story but a glorious one also that reflects the origin and nature of true love. It always endures and can never be dissuaded or overcome.

Anyone who has watched the beloved movie “The Princess Bride” (released the year my wife and I were married!) will agree that true love is set apart, and not “something that happens every day.” What I like about the movie is, apart from its great humor, acting and memorable lines (you can apply them to so much of life, e.g. “Inconceivable!” and “He’s not dead; turns out he’s only mostly dead…”), there is a true depiction that love is so much more than feelings of romance and experiencing happy times together. There is also a resolve and commitment to it which incorporates times of separation, sacrifice, solitude and suffering.

Truly loving someone is desiring the best for them. In the movie, our hero Wesley begins as a simple farmhand serving the beck-and-call of a maid there who treats him rather callously and with indifference. But Wesley loves her nonetheless and answers her every demand with “as you wish.” In time, she comes to see that he always answers her this way, no matter how unreasonable her demands, and she ultimately realizes that each time he does he is actually saying “I love you.” Such sacrificial service soon melts her heart, and she too loves him for all the tender, gracious, patient and forgiving ways he had taken the initiative to love her by. Upon their mutual declaration, Wesley decides he must go away and earn his fortune in order to support their life together. This became years of separation and a belief that he had been killed. Buttercup (our heroine) yields to despair (“I will never love again”) and vows a life of solitude. Yet she is caught up unwillingly into a political scheme of being used as a pawn between two kingdoms, must marry a prince she does not love, is kidnapped, betrayed by the prince, and set to be killed. All of that, but trust me, it is a very funny, and inspiring, story of love.

It strikes me though that any story we try and depict of love will always take the shape of how God Himself defines, demonstrates, and instills His “true love” into us. In Scripture, the Old Testament tells the story of another bride. From the beginning, God took the initiative to bring light and life into this world’s darkness and void, created a true habitat for humanity and began a civilization of human-kind, made in His image. Though He took delight in us, we only exploited His goodness and turned away from our Maker. Time and again the Bible tells the story of God’s pursuit and tenacious, gracious love that provided, protected, persevered and preserved His people. In the New Testament, like Wesley, God comes for His people to rescue them out of their bondage but must suffer to do so, is betrayed by His own, and set up to be killed in a power struggle. Yet in His death, breaks the power of the sin and death that gripped His bride. And in the transforming power of His love, we are freed from ourselves to pursue true love for Him and one another. The night before He died, Jesus also wrote us a note, forever our ultimate Valentine.

“Just as the Father has loved Me, I have also loved you; abide in My love… These things I have spoken to you that My joy may be in you and that your joy be made full. This is My command: love one another, just as I have loved you. Greater love has no one than this, that one lay down his life for his friends” (John 15).