“Preserve me, O God, for I take refuge in You. My soul speaks ‘You are my Lord; I have no good besides You.’ Those who know and honor you in the earth, they are the mighty ones whom I revere. The sorrows of those who have bartered for another god will be multiplied; I shall not pour out their drink offerings of blood, not shall I pay them homage. Indeed the Lord is the portion of my inheritance and my cup; You have supported my lot. The lines have fallen to me in pleasant places, and my heritage is beautiful to me.” (Psalm 16:1-6) 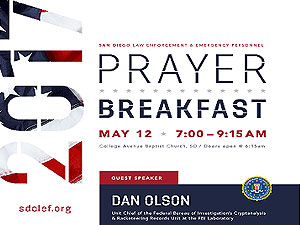 The Annual Law Enforcement Prayer Breakfast was last month and it featured a speaker with a message that was remarkable for its humility as well as its compelling achievement. Dan Olson, an intelligence analyst and code-breaker is the Unit Chief for the FBI’s Cryptanalysis and Racketeering Records Unit at the FBI Laboratory in Quantico. His message took us all on a tour of not just what that enigmatic-like unit does in the day-to-day work of the “real” FBI (inside joke… had to be there…), but also dipped into a sample of how some of the most twisted and tortured minds in this country work in their distorted and deviant way, so much as how Winston Churchill described Russia as “a riddle wrapped in a mystery inside an enigma.” These evil geniuses defy understanding and so convolute rational thought into fantastic distortion. It confounds the mind how deluded they can be, and yet be so convinced they are more cogent than all others. Dan’s life journey to what he does today was not an expected ascension. That he leads the unit he does would have baffled some in his early years, but that’s a story you’ll need to hear yourself. Click the player to the right to hear the message.

The heart of Dan’s message finally focused on an interesting espionage case he handled involving an American spy who was selling out his country with an astonishing amount of top secret material he was internally positioned to obtain, and then bury, using coordinates he coded for other countries hostile to the US to access once they paid him off. But the parallels between Dan and this spy were actually quite astonishing. The similarities between them were more than their differences. Yet one became a proficient traitor, the other an accomplished and loyal patriot. The defining difference between them had not so much to do with their remarkable abilities in doing what they did, but more in the nature of how they nurtured their hearts. For the one, his security lay in the god of himself and the treasures of this world. For the other, his hope and confidence in the God of another.

The trajectories of their lives were remarkably similar, in age, schooling, family situations, opportunities, military experience, training and education, government agency; even their personalities. Yet there they were on opposite sides of the table, Dan the investigator breaking a code so complicated the code-maker himself having trouble remembering how it was done. Dan eventually solved it (as he has done so often… his fastest one in seven seconds after taking it off the fax machine!). But Dan today is a free man, not just on the outside, but more importantly on the inside, the freedom of the mind and heart. The other, in prison. Dan and his team are exposed to unspeakable kinds of crimes, often delving into the heart of the devil himself as they break codes to both infiltrate and decipher the crimes and activities of not just psychopaths but sociopathic crime organizations and foreign entities that have no conscience or value toward human life. It is in some ways a “game” that he lives to solve, but in more serious ways exposure to the hell of evil and darkness that is very much a part of our world. To fight it is to understand and confront it, and one doesn’t do that without suffering from the horror that is often a part of its calling-card. But Dan and his team are able to engage and conquer, not merely because it’s a job they’re passionate about and love to do, but because such forces of evil demand such resistance and battle array. But there is the counter-balance.

What really matters to us? We are wired by God as His crowning order of creation to reflect a divine image of His being and character. Our fallen nature mitigates against that, and we instead strive to exalt and worship ourselves. It all comes from the inherent need for security, satisfaction and significance, but how we go about obtaining that is the difference between advancing the forces of evil within, or elevating by God’s Spirit a character that reflects the lovingkindness, justice and righteousness of the Sovereign God of all things, Who takes delight in advancing the good for those who die to self and live for Him. In the movie Schindler’s List, Schindler talks with Goeth about the nature of true power. Goeth exalts his position as powerful because he had the ability to arbitrarily take a life. Schindler however countered that by stating that real power was rather when we may have every justification to kill, and yet we don’t. True power is both the ability and the willingness to show grace.

We all take varying paths toward the destinies we were made for. Yet there remains with us the choice for great evil, or great good. The deciding element is by what spirit we choose to follow.

“I will bless the Lord who has counseled me; indeed my mind instructs me in the night. I have set the Lord continually before me; because He is at my right hand, I will not be shaken. Therefore my heart is glad, and my glory rejoices; my flesh also will dwell securely. For You will not abandon my soul to destruction, as neither shall You allow Your Holy One to see the pit. You will make known to me the path of life; in Your presence is fullness of joy; in Your right hand there are pleasure forever.” (vv. 7-11)