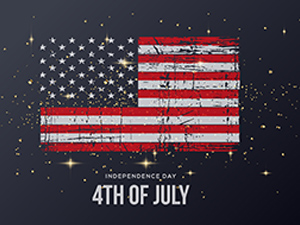 Happy 4th of July weekend. We have every reason to be happy and grateful for such a weekend as this, knowing and recalling the astonishing and remarkable history and heritage we have as a nation that has afforded us the rights, freedoms, liberties and opportunities we all share as Americans. What we so easily take for granted every day is beyond knowing for most rest of the world, and that sentiment is declared every day by the desperate masses who endeavor to come to this country any possible way they can, many at unconscionable risk. To know and recall the great cost of and prices that have been paid by countless citizens and visionaries through the centuries of our history, the pilgrims and puritans looming large in that survey, should humble us into moments of quiet solitude and thanksgiving that we wake to every day with such relative bounty and security at our doorstep. We strive to get even better, and there is much we need to do toward such ends, but let us not forget how far we have come as a country, how miraculous it is that we even came to be, and how fragile it can be if we do not strive to remember Who and what made us so, and the calling each of us has to do our part in preserving and protecting our Constitution, and the rights that define us as a people. May God’s grace continue to be shed upon our great land, and crown our good with brotherhood from sea to shining sea.

I am sojourning my way through the very thick volume of Alexander Hamilton’s Biography by Pulitzer Prize-winning author Ron Chernow that "presents a landmark biography of the Founding Father who galvanized, inspired, scandalized and shaped the newborn nation." It is an astounding book and I highly commend it to you for a wide and inclusive sketch of American History from before the Revolution, the formulation of the Colonies, and the development of our nation with all of the Founding Fathers included in fascinating array. It is a great American history course packed into one book. Put it on your list!

I just finished a month of call-outs with the Emergency Negotiation Team, and thankfully all of our calls ended well, this time all of them being jumpers off bridges. Though two actually dropped, one was not so high as to have killed him or created serious injury, and the other was caught by a large inflated airbag deployed by the fire department. It was a sad and busy month in other ways as well, with two department detectives who were married, perishing together on the freeway as they were struck head-on in the fast lane by a wrong-way driver as they rounded a visually obstructed curve. They had no time to react or even brake. It was a brutal and terrible loss, the collision with an estimated combined speed of about 150 mph. The scene was horrific. The detectives were young, very well liked and accomplished. The husband was assigned to Homicide, the wife to general property and other crimes at her Southern Division station down near the border. It was a day we will never forget.

This has been a very full month I will never forget for other reasons as well. A week from now I will be retiring from the chaplaincy side of my ministry. I began in law enforcement in July of 1978, served six years as a uniformed officer with the SDPD, and then resigned to enter full-time ministry. After finishing seminary at Talbot in La Mirada, I returned to San Diego and founded Christian Law Enforcement Fellowship in San Diego County, in 1987, and came under the umbrella organization of Christians In Government, of which we have held the charter for since 2000. I worked with state, local and federal agencies on the outside for eight years, formulating and leading officer Bible study groups, marriage and family retreats, and the annual Law Enforcement Prayer Breakfast. Then in ’95 I began work as a sworn chaplain with the San Diego Sheriff’s, helping to build a then non-existent chaplaincy program, and with the SDPD, reformatting its program and bringing in more chaplains, making it more proactive to officers and non-sworn personnel. The County Marshal’s Office followed that, and then the District Attorney’s office in 2000 as well. This month marks my 40th year working with law enforcement, and the 34th year of CLEF. It has been a remarkable calling and life of ministry. I will remain and continue to be the lead Director for CLEF, which will continue to support the work of two other chaplain’s in our organization, Dale Lowrimore and Joe Davis, and a third and possibly fourth who may be aligning with us in the very near future; and continuing to organize and sponsor our very successful and looked-for each year annual Law Enforcement Prayer Breakfast, as well as our annual LE Marriage Retreat, the next one planned and being prepared now for Oct. 15-17 at the Twin Peaks Christian Conference Center up at Lake Arrowhead above San Bernardino. I have attached a flyer and registration form for any in law enforcement who may wish to attend, or pass along to those you may know in LE who would be blessed by attending.

It’s a little hard to explain, but one kind of senses when it’s time to step away from various phases of life. Law Enforcement has changed a lot for chaplains on the street, and with call-outs and critical incident responses, I find I don’t have quite the resilience I used to have. I just turned 67, and while that’s not necessarily old-old by today’s standards, for the kind of work I’ve been doing, I’m starting to realize that though I may envision myself at 28, or 38 or 48, the mirror and energy level are not a match to that idea. All is well at the moment, and I keep pace with my responsibilities, but I am sensing much less of a quickening than I used to have, and I believe it’s always better to step aside and hand off the baton before you drop it. I have found an outstanding chaplain who has now been able to step into my roles, both at my station as well as with the ENT and into my position on the triumvate leadership team with the SDPD. My position with the Sheriff’s Office has also been back-filled as well. The DA’s Office does not have someone as such to replace me on their Peer Support Team, but I will remain available to them if they need me…

So, one more week in the saddle as such. It has been a wonderful couple months since putting in my notices and raising up my replacements. Time with officers and deputies and other chaplains, all so encouraging and affirming. I am reminded of the abundance of God’s grace to have carried on such a ministry as only He could have enabled me to do. I never envisioned such a blessed life and ministry, but God’s good future and hope for us are promises He grants in abundance. My work as a Ruling Elder is also increasing both with the burgeoning church Debbie and I continue to serve with, now in it’s third year of particularization, and growing so steadily, and with the Presbytery of my PCA denomination as well, besides the ongoing ministry with CLEF as mentioned. All this to say that this may change what you feel led to support us by, and that is perfectly understandable. You are all precious friends and that will never change, and I will continue to send you updates from time to time on how the general ministry of CLEF continues to serve, but now without my direct involvement as a sworn chaplain in the departments and on the streets. The Retired Fire and Police Association has granted me an honorary lifetime membership, and I will continue to engage as a chaplain as such to all the retirees who meet regularly together... and I have been doing their memorial services for some time now… these men and women who I once worked with while an officer. Our lives do come to an end, and we “finish our years with a sigh…” But until then, I rejoice in the life that I have left, and the wonderful opportunities to continue ministering where I can.

Thank you, for all the years of encouragement, support and prayer you have so lovingly bestowed upon us and this ministry. It has been the wind God used to make us soar in ways beyond what we could have imagined or expected. God bless and keep you in the greatest abundance of His grace. Our love and gratitude forever - Herb & Debbie