“For the Lord Most High is to be feared, A great King over all the earth. He subdues peoples and nations under our feet, and chooses the inheritance of those whom He loves.” (Psalm 47:2-4) 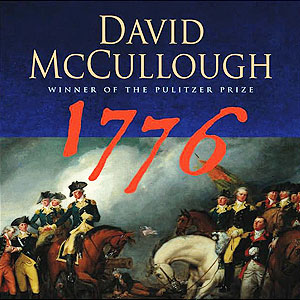 On a recent interstate road trip I was both astonished and inspired listening to historian and author David McCullough’s novel 1776 which “tells the intensely human story of those who marched with General George Washington in the year of the Declaration of Independence - when the whole American cause was riding on their success, without which all hope for independence would have been dashed and the noble ideals of the Declaration would have amounted to little more than words on paper.” It was truly a miracle that our newly minted nation of 13 loosely confederated colonies, still comprised mostly of British loyalist “Tories” and less than half American Continentals, survived the first few months, much less the first year, of the war. England possessed a vastly superior and crushing military force, and though we lost most of the battles, nevertheless stayed alive when we had to. By all accounts we should have been defeated early on, but for miraculous escapes to fight another day. And the Continental Army itself often lost hope and heart, yet were led by the faith and resolve of select leaders and heroes who, with incredible resolve, ultimately brought us through that first year with remarkable feats of heroism. Still, the war ground on for five more until Cornwallis surrendered to Washington at Yorktown. The 1783 Paris Treaty made us officially independent. Washington was unanimously appointed our first President, and astutely observed in his inaugural address “No people can be bound to acknowledge and adore the Invisible Hand (of God) which con-ducts the affairs of men more than the people of the United States.”

Washington set a tone for the character and moral compass of America right from the beginning. His was a faith that placed hope and calling not in the strength of man, but in the sovereign grace, goodness, mercy and might of the God of all creation. In his prayer journal as President, he wrote: “Let me live according to those holy rules which Thou hast this day pre-scribed in Thy Holy Word… and help me thoroughly to examine myself… increase my faith, and direct me to the true object Jesus Christ, (Who is) the Way, Truth and Life, and bless O Lord, all the people of this land.” How blessed we were indeed for his leadership. His guidance through the war, constitutional convention and presidency established America as a nation that regards “the eternal rules of order and right which Heaven itself has ordained.”

A century later, with a revered list of Presidents who followed suit with Washington’s regard and reverence for God’s providence over this country, the U.S. had successfully warded off another attack by Britain, ended slavery through the Civil War, and was expanding into the western territories. Benjamin Harrison, 23rd President, served as a Colonel in the war and went on to become an Ohio lawyer and senator. As a soldier he was known for hosting prayer meetings in his tent each night while on the battlefield. He wrote a letter to his wife asking her to pray that God would first “enable me to bear myself so as to honor my country and my friends.” In a letter to a friend, he stated “It is a great comfort to trust God, even if His providence is unfavorable. Prayer steadies one when he is walking in slippery places, even if things asked for are not given.” In his inaugural address he stated “No other people have a government more worthy of their respect… or a land so magnificent in extent, so pleasant to look upon, and so full of generous suggestion to enterprise and labor” and later recom-mended that we all “implore the favor of God that the blessings of liberty, prosperity, and peace may abide with us as a people, that His hand may lead us in paths of righteousness and good deeds.”

William McKinley, 25th, also in the Civil War and an Ohio lawyer, a two-term Governor and congressman before winning two terms as President, presided over the Spanish-American War. Of that, he stated “I walked the floor of the White House night after night until midnight, going down on my knees praying to Almighty God for light and guidance.” McKinley was shot by an anarchist seven months into his 2nd term and died eight days later, but not before he publicly forgave his assassin. He stated in his first inaugural address: “Our faith teaches that there is no safer reliance than upon the God of our fathers, Who has so singularly favored the American people in every national trial, and who will not forsake us so long as we obey His commandments and walk humbly in His footsteps.” And so with Teddy Roosevelt, 26th, “My fellow-citizens, no people on earth have more cause to be thankful than ours, and this is said reverently, in no spirit of boastfulness in our own strength, but with gratitude to the Giver of Good Who has blessed us with the conditions which have enabled us to achieve so large a measure of well-being and of happiness.” May we be ever mindful and grateful for God’s blessings upon our country. “The things of the body are good; of the intellect better; the best are things of the soul; for in the nation as in the individual, in the long run it is character that counts.” – Thomas Moran