“To You, O Lord, I lift up my soul. O my God, in You I trust. Do not let me be ashamed; do not let my enemies exult over me. Indeed, none of those who wait for You will be ashamed; but those who deal treacherously without cause will be. Rather, make me to know Your ways, O Lord; teach me Your paths. Lead me in Your Truth and teach me, for You are the God of my salvation; for You I wait all the day.” (King David; Psalm 25:4-5) 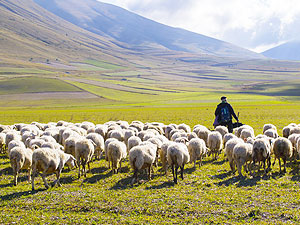 Patience, perseverance, persistence, all of which require from us something deep down that keeps us moving forward, hopeful, hearted and humble. We come out of the womb wanting what we want right now. It emerges from a primal need for satisfaction, then security, and ultimately significance. The problem though from the beginning is that we sense our dependency for receiving those things from a supplier. As a baby, all we sense is hunger, cold, thirst and a need for human touch. But early on as we grow, we begin to see that resources must be acquired, and our default means for obtaining such is by outright demand. We (hopefully) then move from that fail thinking to an understanding of respecting the process of supply, appreciating the grace of provision, and then knowing the responsibility of earning. But critical aspects of awareness can be missed in each of those junctures which, left unlearned, lead to a deluded perception of what it truly means to be satisfied, secure in your circumstances, and valued in yourself.

A good portion of King David’s early life was waiting. He was anointed to be the future King of Israel by the prophet Samuel at age 13, the youngest of his seven other more formidable brothers, but he had to wait seventeen years for that coronation. Meantime, God had lessons of patience to teach David, lessons which involved faith, fortitude, and a fidelity for his calling. It started with just tending sheep. Sheep are one of the most dependent and helpless animals on the planet. They’re fearful, mostly unaware, and prone to wander away. They’re also the favorite prey for virtually every predator. A shepherd has to do everything for them, from leading them to pastures, to quiet water (babbling brooks scare them!). There David learned attentiveness, patience, courage (against bears and lions!), and compassion for the many times he had to search for the one missing, bringing it back safe (and thanklessly). Sleep was fitful on those dark, dangerous nights, but the starry display of God’s handiwork… fabulous. He went from that to confronting Israel’s biggest foe, Goliath, and from that to King Saul’s court as a musician, then as a warrior, then as a fugitive from Saul’s obsession with power.

In those seventeen years waiting to be made King, David was given the crown over Judah and Benjamin when Saul died, but still had to wait another seven to be King over all Israel’s twelve tribes. Ten years were spent running around the wilderness fleeing from Saul and hiding in caves and dens, relying on the good graces of the land’s inhabitants to feed and water him and his men. Ten years of not knowing if Saul would catch and kill him, or if maybe God had changed His mind about making him King. After all, running from his own people? So there were plenty of earthly reasons for David to doubt God’s promises, but he could never doubt God’s providence and protection. We aren’t told when it was David wrote Psalm 25, but regardless, even the forty years of his eventual reign were fraught with perplexities, treachery from within and without. Yet what we see in this psalm is an acute awareness by David that God remembered him, was compassionate to his trust in Him, and that He was faithful to His promises. David’s life is a remarkable chronical of wholly out-numbered odds and contrary circumstances. He was always the underdog (his few hundred to Saul’s 30K, and on and on) and yet, when he trusted God for the outcome, always victorious. What got in the way of that was his impatience for God to act and supply in His own way. And David suffered dearly for each of those times, whether it was numbering his troops, wanting more of what was already abundantly supplied to him, or not being persistent in what God had called him to do and to be. Yet when David trusted God to accomplish His plan and purpose in His way and time, his heart was prepared for the answer when it came.

At three different times and in three different ways in Psalm 25, David asks for forgiveness, for the sins of his youth, for the de jour sin of the day, and then for all the sins he could remember. He goes from that to acknowledging his reliance on God for protection from enemies, the biggest one being himself. Oliver W. Holmes wrote “What lies behind us and what lies before us are tiny matters compared to what lies within us.” David pleads for God to lift up his soul by teaching him repentance, to follow God’s paths instead of his own, leading him in His Truth, instructing him in the way he should choose, and in reverence for Him. David finally grasped that waiting on God also weathered his character, and that learning what God took time to teach him yielded the promise of his calling. When we do likewise, we discover the character of our satisfaction, security, and significance.

“Let integrity and uprightness preserve me, for I wait for Thee.” (v.21)