“Behold, I send you out as sheep in the midst of wolves; there-fore be shrewd as serpents, and innocent as doves. But beware of men” (Matthew 10:16-17a) 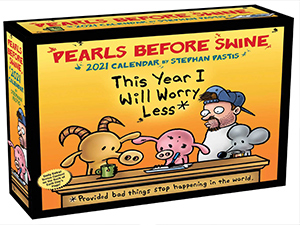 Stephan Pastis, who writes the comic strip Pearls Before Swine has poignant perspectives of life and society and is often able to illustrate compelling truths of our human nature through his cast of personalitied characters, each of them a reflection of someone you know, or something you know in yourself. Of truth, there’s a little of each of them in us all and his strip provides a disarming and safe (and funny) moment to be candid about how we often think… or fail to. I never miss his entry, as I like the way he shows pithy examples of how we all get along. A recent one has pig (the character’s name… because he is one; not always quick on the uptake but faithful in follow-through) catching a ride on the back of a magic fairy and telling her he needed her to “fix the whole world; the virus, the racism, the planet, the hungry.” The fairy acknowledges his request but tells him there’s just one problem… “I don’t exist.” Thereupon, she disappears and pig falls to the ground. But then she reappears for a moment on a side panel and tells him “But you do.” Pig ponders for a moment, then opens up a food bank for the hungry and prances away with wings he’s attached to his back, holding a star topped wand.

Point taken. Our first thought in the face of serious world or community issues is that someone somewhere should do something, and fast, and we cry out for it to be done. But too often what happens are opportunists looking to exploit matters to their own advantage. We think it gets “handled,” but it doesn’t, and just gets worse… the magic fairy illusion. Sometimes there really isn’t anything we can do, but pray. Yet more often than not what truly impacts a destructive situation or state of affairs and the hearts and minds involved is the trust and care that comes from a genuine and personal response or relationship of concern from one person to another. We do exist, individually, and can do more than we think to restore peace and well-being. As you think back on the moments and incidents that inspired you most, they’re perhaps largely from a kindness or grace you received or witnessed by someone who did it either anonymously or out of sheer unem-bellished charity, just to see it done. Or it may have been an act of true forgiveness, a benevolent gesture or a well-timed compliment that affirmed and encouraged you to press on with faith and hope. Proverbs 3:27 says “Do not withhold good from those to whom it is due, When it is in your power to do it.”

Jesus chose 12 men to be his disciples. There was not anything particularly remarkable about any of them. They were common men from all walks of the Jewish community, fishermen, tax collectors, a couple of zealots (political right-wingers, one of whom was even a thief, and ultimately betrayed Jesus), and otherwise everyday workers just trying to eke out a living. They weren’t picked because they were movers and shakers or particularly brilliant. And for the three years Jesus traveled throughout Judea it was difficult for them to see Jesus as anything other than a Rabbi, though uniquely gifted and powerful. At one point he sent them out two by two on their own, and instructed them to go throughout the towns and villages proclaiming the Kingdom of Heaven at hand, and gave them power to heal the sick, lame and blind and to cast out demons. Great things were accomplished through them but it was more to help them see what God could do when they trusted his power to work through them. We’re not all that different today when we decide to do the right thing.

Yet with all of the good that can be done through us by God’s power and with amazing results, that doesn’t mean it’s an easy task. It will also cost us. Hmmm. Serving God as a peacemaker and benefactor has its consequences? The sardonic principle that “no good deed goes unpunished” is not a facetious one. Jesus also warned his disciples to “beware of men.” The message of God’s Kingdom is one of peace and rest: “Come unto me all who are weary and I will give you rest” (11:28). But peace and rest is not the agenda of the wolves in the world that are only after power and control. So peacemakers will be resisted, abused, maligned, singled out and maltreated for trying to do the right thing. People of a darker persuasion will see you as a threat to their agenda and many of them will simply misunderstand you as well. But that doesn’t change the calling we have before God to be that fairy who seeks and pursues peace, who does justly, loves mercy and walks in humility to be used for God’s lovingkindness, justice and righteousness in the world. God has entrusted to us powerful means to heal, restore hearts, cast out evil and inspire others toward the same. It will indeed come at a cost perhaps more often than not, yet that doesn’t negate the spiritual personage God would manifest through you. As professional peacemakers, there is before you a high calling of trust and expectation, standard and sacrifice, and the heart God gave you wouldn’t be satisfied with anything less.

So “Let us not loose heart in doing good, for in due season we shall reap if we faint not” (Galatians 6:9). Fairy on…