“And let us not lose heart in doing good, for in due time we shall reap if we do not grow weary.” (Galatians 6:9) “Difficult things take a long time, impossible things a little longer.” “Those who sow in tears will reap with shouts of joy.” (Psalm 126:5) 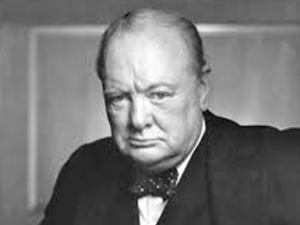 In 1941 after the start of WWII, Winston Churchill addressed his boy’s school alma mater with a twenty minute speech which became a maxim of identity and perseverance for the British people. His fundamental axiom for the circumstances they faced was this: “Never give in, never give in, never, never, never, never, in nothing, great or small, large or petty – never give in except to convictions of honor and good sense.” His fervor proved true, for the country, its history, culture, good future and hope to this day. Britain persisted, endured, kept fighting, and with the allies, defeated the axis powers.

Life is a formidable opponent, or rather, from the moment we gain life there is no shortage of means at work which strive toward ending it. And one day, one of them will succeed. COVID-19 notwithstanding, that too is axiomatic and inevitable. But this reality by no means points toward either the futility of life’s purpose or the absurdity of striving in like manner against malevolence. As LEOs, a friend reminded me today, you are in the particular cross-hairs of this fight because you so directly wit-ness and suffer through the dark works of evil every day. It is hard, sometimes, to exit the relatively placid world of your family each day and know you are reentering a torrid and consuming world of sinister crime and corrosion all around. One can easily doubt the value of even trying, or staying true to the fight.

There are five epic scenes in the “Lord Of The Rings” trilogy, and the number one is a response Sam gave to Frodo when he was ready to give up. It was a reply that transitioned into resolve for them both…

“Sam: I know. It’s all wrong. By rights we shouldn’t even be here. But we are. It’s like in the great stories Mr. Frodo, the ones that really mattered. Full of darkness and danger they were, and sometimes you didn’t want to know the end because how could the end be happy? How could the world go back to the way it was before so much bad happened? But in the end, it’s only a passing thing, this shadow. Even darkness must pass. A new day will come. And when the sun shines it will shine out the clearer. Those were the stories that stayed with you, that meant something. Even if you were too small to understand why. But I think, Mr. Frodo, I do understand. I know now. Folk in those stories had lots of chances of turning back only they didn’t. Because they were holding on to something.

Frodo: What are we holding on to, Sam?

Sam: That there’s some good in this world, Mr. Frodo. And it’s worth fighting for.”

How often have you wondered what in the world you were doing, or even “doing here?” Have you ever felt that perhaps you sort of accidently wandered into someone else’s story and were ill equipped to manage what you were facing? Such doubt and insecurity is a sincere part of our human condition. I do hope you answered yes to that question because it’s the first condition we need to be in to recognize our inherent inadequacy. We are wired more toward dread and discouragement than determination and dedication. Yet consider the certainties of allowing darkness to win the day. Sam understood what was at stake in the deepest way. He first recognized that the story they were in, regardless how they came into it, was one that mattered. The opportunities and temptations to give in will always be legion, but when there is no alternative but to succeed, what matters is that you hold on to what matters, that you keep your grip on what’s worth saving, fighting for and not letting go of. Secondly, ignoring evil and adversity doesn’t force it away, neither is it ever insurmountable. It cannot ultimately stand before the rectitude of lovingkindness, justice and righteousness. Thirdly, God has anchored life upon the existence of hope. Indeed, trouble nurtures forth perseverance, and perseverance, proven character; and proven character, hope; hope in the God Whose Love cannot ever leave or forsake our trust in His strength and providence. On the other side of trouble is always a new day, shining brighter and clearer than before because the truth He gives us to dispel the darkness proves true in every instance without fail - and we then realize that the darkness was only absence of Light. Bringing light into darkness pierces through its lie and scatters it into its elemental chaos and dissipation.

The battle for the goodness, right, truth and integrity of what you stand for and what you are called to carry forward is real, powerful, worth fighting and giving yourself for. You will feel, often throughout the fight, like you are losing or that you cannot succeed, or even that you are the wrong person for the burden. But you are where you are because you were meant to be, and by God’s promise, His Power will be perfected through your weakness. We must never give in. Righteous persistence will always win over evil and adversity; it must flee.

Harriet Stowe admonished those against slavery to “Never give up, as that is just the place and time that the tide will turn.” It did, and will again. In the end, it’s only a passing thing, this shadow. Darkness must pass, and a new day will come. Get up, suit up, show up… and don’t give up.

“Courage doesn’t always roar; sometimes it’s the quiet voice at the end of the day whispering ‘I will try again tomorrow’.” – Mary Radmacher

“Therefore, beloved brethren, be steadfast, immovable, always abounding in the work of the Lord, knowing that your toil is not in vain in the Lord.” (I Cor. 15:58).