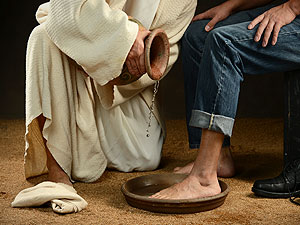 Such was the end of Jesus’ last public discourse before the dark night he was betrayed. He concluded by saying “I have come as Light into the world, that everyone who believes in Me may not remain in darkness.” Then on that fateful night of His passion before Passover, He rose from supper with his disciples, laid aside his garments and girded Himself with a towel, like a servant would, and proceeded to wash each of his disciples’ feet. Then He said to them:

“Do you know what I have done to you? You call Me Teacher and Lord; and you are right, for so I am. If I then the Lord and the Teacher, washed your feet, you also ought to wash one another’s feet. For I gave you an example that you also should do as I did to you.” (13:12-15)

At a county leadership conference I attended last month, a strong theme for effective leadership continued to emerge throughout each of the courses. Whether on character, values, vision, inspiration, "leading from the front,” humility, being people-centered, commitment or just listening (and many other traits), even more than knowledge and intelligence was the wisdom and understanding which generates trust from being servant-hearted. Subordinates, followers, charges and others who rely on a leader need to have confidence in the requisite skills and abilities of their shepherd. Whether of a community or corporation, at heart what generates allegiance and the assurance to submit is the sense that who is followed has a regard and respect for those they lead. Leaders who respect their followers will not lack their validation.

Probably no one group in American society is more looked to day-to-day and respected (for better or worse) than the police, be they local, state or federal. They hold great discretionary power and authority, and for that reason are held to a much higher standard of accountability due to the extreme level of public trust imparted to them. With that comes a great responsibility to cultivate and garner that trust by attitude and action that are predictably trustworthy. They are a social guardian of truth and justice, peace-keepers for our communities and festooned with distinction and decoration symbolizing their authority, mandate and mission, manifesting of their integrity and uprightness.

Strong and pervasive is this theme of servant-leadership. What Jesus did for His disciples was a cultural departure from their own social order where leaders were served and followed under duress. But here was One who compelled them to follow by the passion of His love for them and willingness to sacrifice and serve them as a leader who put their welfare above his. What He did that night, and what followed, turned civilization on its head and interjected an altogether different concept of what it means to be a leader. Rome’s pattern and standards for such were a rotting corpse from within. Even Jewish society had a wrong idea (read Pharisees). Both fell in a matter of course. But what has endured, and what became a proven exemplar for enduring and effectual leadership, even awe-inspiring and socially transformational, is the sincere performance of sacrificial leadership, even becoming the foundation of our U.S. Constitution.

Jesus shone His Light in this dark world by giving value and dignity to even the least of society. The powerless, the despised, the sick, the lame, He sought out and responded to their need, the crooked made straight in the brokenness of their confession. He fulfilled the prophesy that “A bruised reed He will not break, and a dimming wick He will not put out, until He leads justice to victory” (Isaiah 42:3). Such was His life that became the Light of men, the Light that our own darkness could neither diminish nor extinguish, the Light that led Him to His passionate sacrifice.

Servant leadership is inextricably linked to sacrifice. And we can only truly understand what we experience. The humility of sacrifice, born out of a persevering faith in the righteousness of God’s Truth and the hope of God’s lovingkindness and justice, generates a character of passion for the care and consideration of those we lead. The spiritual forces of darkness that are arrayed against us, from within our own self-centered nature as well as from without in a world where evil is pernicious, persistent and propagating, is legion and ruthless. The life of Jesus Who gave us Light showed us the only means of defeating it.

Our role as image bearers of that Light, and the consummate authority we carry to mitigate against the darkness, prevails upon us to be defined by what that Light of Christ commands us to be. That authority emanates from Him, and its proper exercise re-quires His Light to do so. Be the servant who leads by that light.

“Truly, truly I say to you, a slave is not greater than his master; neither one who is sent greater than the one who sent him. If you know these things, you are blessed if you do them” (13:16-17)