A Message from Chaplain Herb Smith

Greetings friends, from the threshold of 2021, which I doubt anyone will have trouble remembering to write on their bank checks… for those of us who still use those. Not that we believe everything is suddenly going to be fine starting Friday, but hopes are that the next year in composite will experience a way forward out of the pandemic and all its related issues. Yet we know that some things from it will hold over, and may in fact be here to stay, such as a heightened concern about contaminants, the composition of the air around large gatherings, the valuation of driving to a workplace each day for some jobs as opposed to working remotely, and deeper and more far-reaching questions that have to do with our whole social culture and cultural perception of each other. We still have a wonderful country to be grateful for, and to support and defend. I hope that 2021 demonstrates yet again what by God’s grace and providence we are able to recover from and build back even stronger.

But on that note of social adhesion, we are a mixed-race people, which is how we as a nation started out in the “new world” to begin with, and how we were able to build a republican form of government. As our thirteen colonies formed, so was our union together, and E Pluribus Unum, “out of the many, one,” became our motto from the beginning. Composed of thirteen letters, this Latin phrase was being used as early as 1776 at the start of the Revolutionary War and was approved by the Continental Congress as an official motto of our country in 1782, and immediately began appearing on our coinage, paper money and national seal, and has ever since. This is important to understand, because from our earliest history we were not one race or nationality but many, from several different countries, and that has remained true these now 245 years and we are the stronger for it. We are defined not by what separates us, but what unifies us as a nation of laws, rights, liberties, and a fundamental Constitution that declares all men and women as created equal under God, those rights assigned by their Creator, and which are inalienable. That makes us a country that has and continues to learn the hard lessons of how to live peacefully and profitably with one another, respecting the integrity, personhood, privacy and property of each individual. It has been what built our prosperity, and what propels us into the future. We are defined not as separate groups, but as one nation, under God, indivisible, with liberty and justice for all. May we never forget that such is our core principle as a nation, as a free people, and may we never fail to die on that hill, as have so countless many of our patriots. My God’s Spirit continue to crown our good with true brotherhood, from sea to shining sea.

Regardless of how all these elections go, God is still on His throne, and in God we trust. Let us ever strive to be the source of the light for our city on a hill, in our communities and cultural influence. We are blessed with opportunity to do great good. May we not forget who and Whose we are, and that we have been born for such times as these.

So good to hear from many of you over the Christmas season. And we are so greatly encouraged by you all. The work goes forward with CLEF, and we rest in the power and joyous love of our great God and Savior, Jesus Christ. The Lord give us all the grace that we need to glorify Him eminently in the new year. Our love to you all! - Herb & Debbie

“And not only this, but we also exult in our tribulation, knowing tribulation brings about perseverance, and perseverance proven character; proven character, hope; and hope does not disappoint because the love of God has been poured out within our hearts through the Holy Spirit Who was given us.” (Romans 5:5-5) 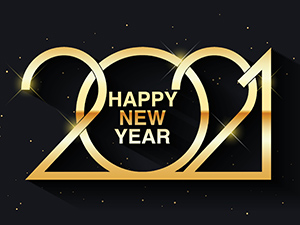 “Hope begins in the dark, the stubborn hope that if you just show up and try to do the right thing, the dawn will come.” - Anne Lamott

Stephan Pastis is at it again in his comic strip “Pearls Before Swine” in a recent (Oct.18) effort to impart an encouraging perspective midst our society’s ever-growing encroachment of all things COVID. Here now, “Rat” sketches our rather naïve yet dauntless optimist “Pig” valiantly carrying around his unwieldy yet generous box of “HOPE” wherever he goes. Notwithstanding the successive damage it sustains by his tripping and dropping it, having a tree limb fall on it, getting hit by a truck with it and then falling through a bridge from it, Pig continues to carry its tattered and torn remnants as though it’s not the worse for the wear. Friend “Rat” comments “Hard not to admire” as Pig intrepidly putters away taping up and repairing his dilapidated yet treasured store of assurance.

Hope does spring eternal in us all if we are not too battered down by the vicissitudes and viruses of life in our times. Even as Aragorn reassured the lass who asked him at the Battle of Helm’s Deep if their situation was hopeless, he replied “there’s always hope.” That and the Hunger Games logos, “Hope is the only thing stronger than fear.” I would add that is, hope laced with compassion, and a love and respect for all that is good, true, and beautiful. It is what draws us back to center when we feel strung out by the stress of disappointment, loss, discouragement and what seems like failure. Sometimes, as author/speaker Christine Caine states, “when you’re in a dark place you think you’ve been buried, but you’ve actually been planted.” All which adversity germinates in our life really does give truth to the adage “if it doesn’t kill you it will certainly make you stronger.” We don’t generally want to die but after all there are some things worse than death (Cpt. Jack Sparrow…). But as Jesus explained as well, a seed doesn’t do anything unless it gets planted in the ground and dies, and then propagates into a plant that bears much fruit. Life without pain has no character, just as a “stressed” piece of furniture or a firefighter’s helmet isn’t beautiful without the marks and dents that reflect its integrity. Wisdom and understanding, patience and persistence, are born through what can only be generated by humility-spawning hardship.

So where are we amidst this sea-change of a pandemic? In last year’s January article, I talked about facing a new year with a daring resolve to do the right thing toward a “faithfulness to a simple and divine ordinance to keep and protect the people and things in our life that matter the most…”

“We don’t go through life alone, and the circumstances and people God places us into and with, all have a purpose to enlarge us more greatly than what we are, and to prove His faithfulness, through us and with us… Trusting [God] for that purpose and in that process with the faith, hope and love only He can provide, is to write a story for our lives that could never have been written or imagined on our own.”

Certainly 2020 was beyond anything we could have imagined or predicted, and it has both humbled and sobered us into recognizing that we really have no idea what is ahead. And above all that, neither is there much we can do about it. Political and social issues are always in the mix of influence, but natural disasters, like invisible pandemics, defy our best efforts to prevent or control. In the end we are left with a finite sense that the only thing we can control is our response, and one which places the welfare of each other in high regard. When we do, we become an arm of the One Who does control all things after the order of His will, and Who is faithful to His Word. Author Jack Countryman says it plainly… “God makes a promise. Faith believes His promise. Hope anticipates its fulfillment. Patience quietly waits.” And as declared in Hebrews 6:18… “God has given both His promise and His oath. These two things are unchangeable as it is impossible for God to lie. Therefore, we who have fled to Him for refuge can have great confidence as we hold to the hope that lies before us.”

We have a new year before us, but our situation remains the same. Yet for all the tribulation, we are also tested and tempered. God only knows what we are being prepared for, and what He intends to create out of it all. Our box of hope, big or small, will get dented, bent, torn and crushed. But if it’s the love of God that keeps it taped together, our assurance will not be disappointed. “Sustain me (O Lord), according to the Word of Thy promise, that I may live; and do not let me be ashamed of my hope.” (Psalm 119:116)

“It’s turning the thunder into grace, knowing sometimes the break in your heart is like the hole in the flute. Sometimes it’s the place where the music comes through.” — Andrea Gibson