“One thing I have asked of the Lord, and that I shall seek; that I may dwell in the house of the Lord all the days of my life, to behold the awesome beauty of the Lord, and to contemplate in His sanctuary… I would have despaired lest I had believed I would see the goodness of the Lord” (Psalm 27:4,13). “If You, Lord, should mark iniquities; Lord, who could stand? But there is forgiveness with You, that You may be revered” (Psalm 130:3-4).

The featured article in last month’s Parade magazine focused on the feeling, or emotional response, of awe. I remember during Operation Desert Storm, the “shock and awe” devastation of the U.S. military’s firepower from its command and control weaponry was overwhelming and paralyzing. Over 25 years later, the Air Force notes that “The effort to push Iraqi forces back to their own territory represented the largest international military effort since World War II and the biggest U.S. operation since Vietnam. It also marked a turning point in air power, the legacy of which is still affecting the Air Force to this day.” I remember the day on which the attack was launched, Jan. 17th of 1991. I was driving our family to a holiday spot in the mountains, and we were all transfixed, in awe, to the radio. The days which followed, with all those unbelievable television videos (in real time!) were almost beyond comprehension. It was as much shock and awe to the U.S. population as it was to the Iraqi Army. They were decimated.

Awe is a remarkable and quite possibly our most powerful emotion. It is defined as “the feeling of being in the presence of something vast or beyond human scale, that transcends our current understanding of things” according to psychologist Dacher Keltner, head of UC Berkley’s Social Interaction Lab. Awe can arise from an overwhelming view of physical beauty, witnessing a display of incomprehensible power, or experiencing an astonishing act of human grace and love that rocks our world. Such things bring us up short of processing such encounters within the world we know, and affectingly transforms our thinking and knowing in a moment of incredulity and inconceivable enlargement. We at once feel small, ignorant, and yet so privileged. 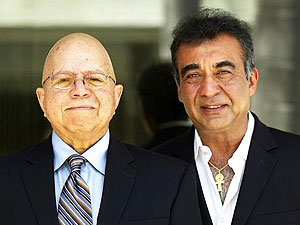 A few days after reading the article on awe, I came across another that pictured yet one more marvel that always puts me in awe. It showed two men, both 67, who 21 years ago suffered the tragedy of their son and grandson respectively destroyed with the murder of one by the violence of the other. What vaulted me again, and all who know their story, into shock and awe, was the amazing bond they shared through the act of forgiveness.

The one man’s grandson, during a robbery attempt, shot and killed the other man’s son, a student trying to work his way through college, when he tried to deliver a pizza to a fictitious address. For a pizza and change less than $20, one was murdered, and the other’s life forever altered by that crime. A senseless slaying, and yet one which also set up another kind of choice and decision by the families of those involved. Shunning hatred and retribution, brokenness and despair, the one begged for forgiveness, and the other, from a broken heart, granted it. It was the only thing that brought back genuine healing and wholeness. Together they formed the Tariq Khamisa Foundation to work toward eliminating youth violence, “carrying a message of peace and respect to nearly a million students around the world,” which has included the White House and Pope John Paul II. One family member refused to forgive. The victim’s fiancée, “crushed by the sudden death of her lover… turned to drugs, dying of an overdose in 2002.” The rest of the family embraced both the perpetrator as well as his family, refusing to allow the tragedy to claim anything more than it had. They still visit him in prison, and intend to advocate for his release at his parole hearing next year. On his part, “his years in prison have given him time to repent, to beg forgiveness from the Khamisa family, and think that he might one day make some amends.” He has already been given a job offer… working with the foundation as a spokesman, if freed. That level of compassion and reconciliation enabled the shooter to realize his life was redeemable and he wasn’t just a throwaway.

Awesome beauty impacts and transforms, even enlarges, the soul more than anything else we can know. To see and sense and comprehend and feel the Divine in nature, the cosmos, creativity, providence, grace, goodness and redemption, is to somehow connect in the depths of our being with a personal sense of God’s presence and power. Only humans are wired to grasp and discern such an interdimensional awareness. It is also a choice we have to be altered by God’s awe. Our world is ad nauseam with hatred and senseless destruction. We were made for another world of hope and healing. Grasping True Beauty... what a theme for Thanksgiving.

“O man, hope in the Lord; for with Him there is lovingkindness; with Him is abundant redemption, and He would redeem you from all your iniquities” (vv.7-8). “Therefore, since we receive a new world from Him which cannot be shaken, let us show gratitude, by which we may offer to God an acceptable service with reverence and awe…” (Hebrews 12:28)